A developer needs a system to work with. For embedded developers, a development system does not refer to the platform his work is going to run on (that's called the target), but the system he uses daily to produce the work. This article introduces the setup of my daily driver, a Lenovo ThinkPad T470p with Intel® Core™ i7-7820HQ Processor and 32GB DDR4 RAM. Even with the same setup, your mileage may vary under different hardware configurations.

As it is quite a nuisance to write an article for every single purpose of the system, I will briefly cover all the roles of this machine, but not going into details. As a result, this article is not meant to be treated as a system configuration guide.

After quite long struggling with Arch Linux and Gentoo, especially with the desktop experience, I turned to the well-known Microsoft Windows operating system in 2018. After several iterations of reinstallation, the current installation has been serving since July 2019 (confirmed via battery report of OS). The specific system variant as of writing is shown as follows. 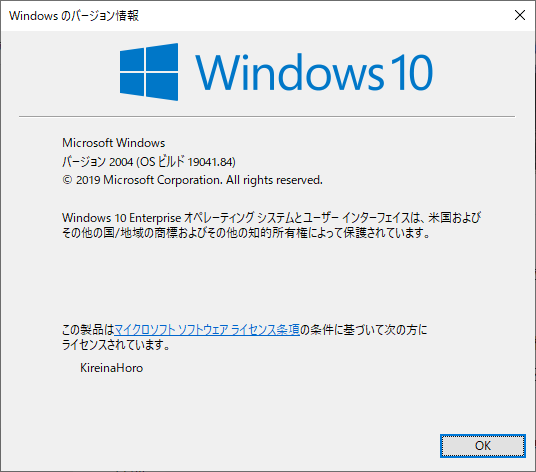 Note that the system is in Insiders Slow Ring to get a usable 20H1 build. This will be explained in the following section.

The host system functions as the primary interface (i.e. captures all the keyboard and mouse input from me, outputs to internal and external monitors, drives all connected peripherals, provides connectivity). Besides, it hosts almost all the complex development tools that require a GUI (e.g. VSCode, Visual Studio, IntelliJ IDEA, Vivado, IDA Pro, Intel Parallel Studio, etc.), utilities, the Chrome browser, Internet chat programs, Office and Adobe suites, as well as a little bit of leisure stuff (connects to the organization SMB share for some classical music). MSYS2 is also installed for tasks that are largely platform agnostic but require a Unix utility to run (example).

You've seen it correct: the system has multiple virtualization platforms installed and running, namely Hyper-V and VMware Workstation. The two platforms would not work together if you're on current versions of Windows and VMware. According to imbushuo, Microsoft has provided VMware with some internal APIs for VBS support. As a result, with VMware Workstation Tech Preview 20H1 and Windows 10 Insider Preview Build 19041, one can simultaneously enable the two platforms and boot virtual machines from both of them. However, due to the nature of nested virtualization (VMware workstation runs in the host domain of Hyper-V), a performance impact is anticipated, and VMware will hint you about this:

The two VM platforms host two different virtual machines, each serves different purposes. Both of the virtual machines are accessed over SSH via PuTTY. Furthermore, home directories in the two VMs are mapped back into Windows via SSHFS for convenient file exchanging.

With this setup, I can run OpenOCD whenever a gdb session is needed, and switch to hwserver whenever I need to use Xilinx debug cores or program the FPGA.

After struggling with HiDPI issues on native GNU/Linux and battery life issues on macOS, I resorted to using Windows 10 as the main operating system on my laptop. Though there's WSL, it's not running Gentoo and has a severely degraded performance. As crossdev is really easy to …